Any American who has been to enough weddings has likely heard the old saying about “something old, something new, something borrowed, something blue…”. It’s an idea that has been carried through generations of brides on their wedding day. But what does it mean? Where does it come from? And what is the significance of having something blue? 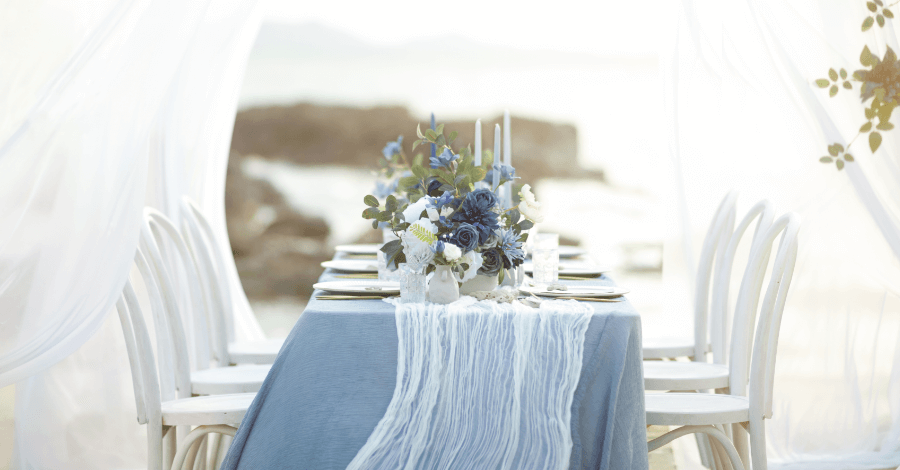 The History of “Something Blue”

As with many of our American traditions, it started in the Victorian age in England in the late 1800s. There is sincere sentiment behind the list of the items mentioned in the text. The hope is that with them on hand, a bride will go forward into married life with everything she needs for it to be successful.

First, something old. She should wear something from her life before she met her future spouse, from her single life. It should represent something great from those years she wants to bring to her marriage.

Next, something new. She should wear something new for this next chapter in her life, the life she and her spouse will enter together. 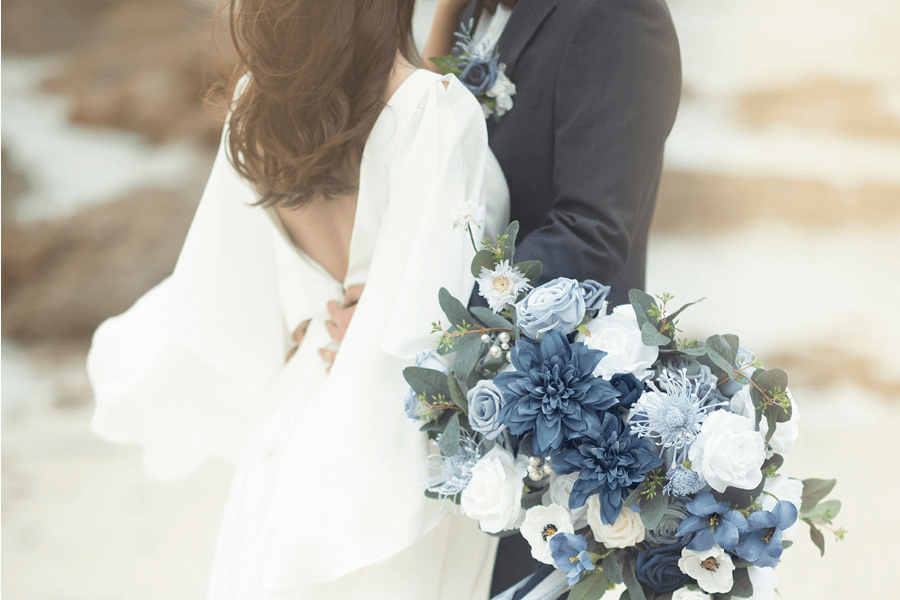 Then, something borrowed. This is a superstition centered around the idea that if you borrow something from a married woman who is happy, you will receive some of her luck. The jury is out on whether or not this is true.

Finally, something blue. Traditionally, it was a color to represent fidelity. Wear blue to signal your loyalty to your groom. Some say it was to confuse the evil eye or to prevent bad luck. But more importantly, it was a fashionable color choice for your wedding day before white became popular in the western world. Put simply, people just liked it.

While white seems to have always been the traditional color of weddings, that is not the case. Most women who were not of nobility simply wore the best dress they had. The elites threw more opulent celebrations, embracing trends and showing off their wealth with the fashions of the time. And yes, many times, that included many blue dresses.

Philippa of England, a woman who became the Queen of Norway, Denmark, and Sweden, was the first bride on written record to have worn white. As a woman marrying a man of lower title, she opted to wear a modest gown, opposite of her elaborate coronation dress, and a crown of flowers instead of jewels. It was essentially to make her future husband feel more comfortable about the imbalance of power.

England’s Queen Victoria and her daughters cemented the white dress into the ethos during the industrial revolution. New technology led to a new and growing middle class. Women were often looking for ways to display wealth and sought to imitate the royal ways of the queen.

Victoria wanted her wedding to be less inaccessible and lavish. She wanted a more inspirational event, so she wore a gown that could be replicated–to some extent–by the common people. She asked the same of her daughters, and because this was when photography was becoming prevalent, their photos were widely spread and heavily influential. By World War II, it was a practice that had become a tradition. 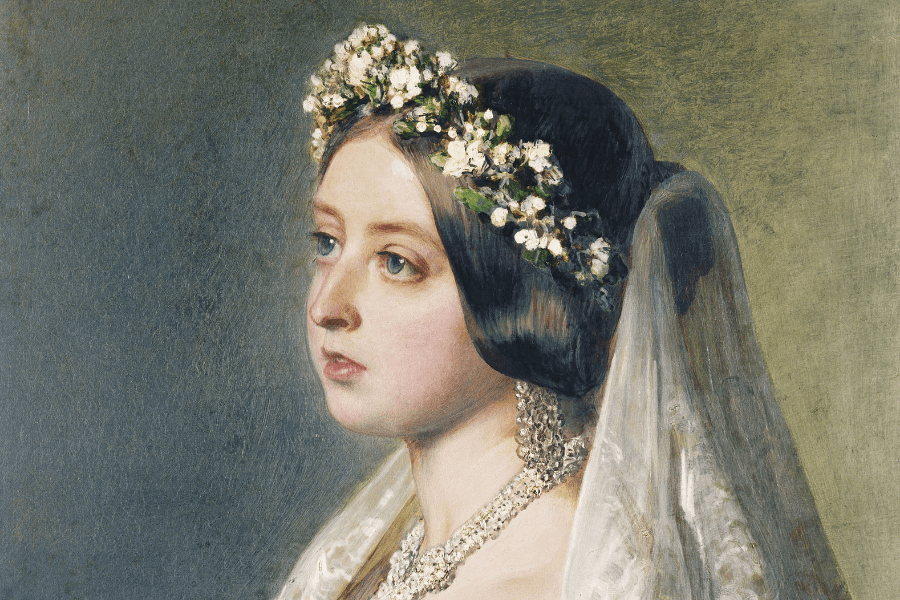 So while blue may not be a popular wedding dress color today, it has remained a small part of many weddings because of the saying. It’s a nice color, so participating in the tradition, regardless of beliefs, is often something fun for brides to think about. And if it happens to be true, bringing them luck in love for years to come, then all the better. Ling’s Bridgerton Pastel theme puts the color front and center and is a nod to history and happy marriages. 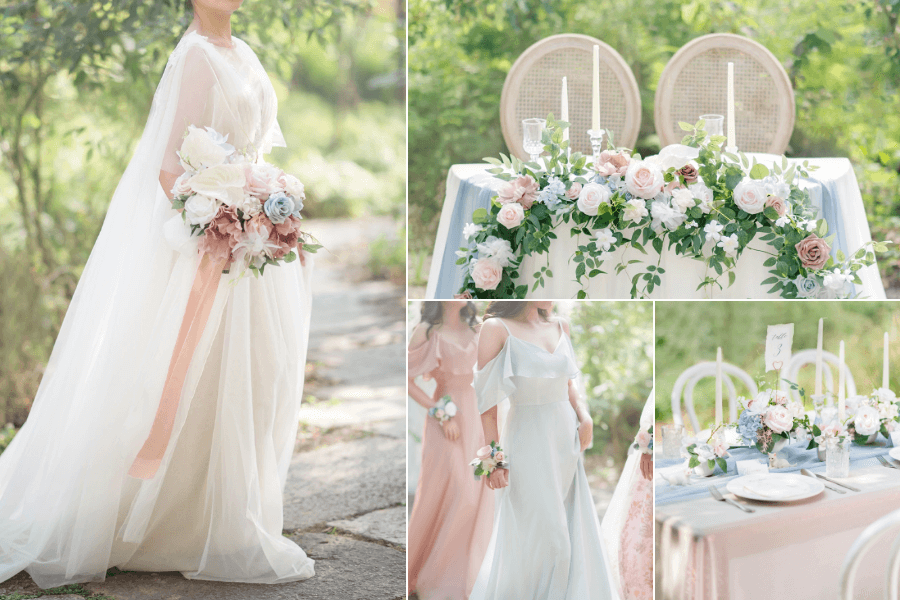 The last item on the list in the saying is a “sixpence in your shoe.” As you can probably guess, dropping a coin in your shoe is supposed to bring good fortune both in life and in business. Back in the day, it was something the bride’s father did for her.

The color language of blue

Outside of its historical significance, blue is a meaningful color. It's calming and peaceful. Is navy good for a wedding? In darker shades like navy or royal blue, it can still invoke the ideas of tradition and loyalty. Businesses often infuse their logo with the hue, because it is the color of trust, a feeling that builds credibility with their customers.

How to incorporate “something blue” into your wedding

Your “something blue” doesn’t have to be clothing or jewelry. Pin some flowers in your hair or tie a blue ribbon around your bouquet. But it doesn’t even have to be on your body. It can be anywhere! Maybe the groom can wear a blue boutonniere, or perhaps a blue floral arrangements or rose petals could decorate your walk to the altar.

When you see your “something blue”, it should bring you joy knowing what it represents. Loyalty is an honorable trait, and a well-placed item can remind you of the strength of the vows you're making at the ceremony.

Using blue wedding color palettes can infuse all of these feelings into your day. Blue hydrangeas can bring you tranquility as you walk down the aisle. A beautiful reception table decorated in dusty blue and navy can create a soothing vibe all evening. It’s a perfect theme for a beach wedding, too! As the color of water, you can incorporate your natural surroundings, bringing nature into your celebration. 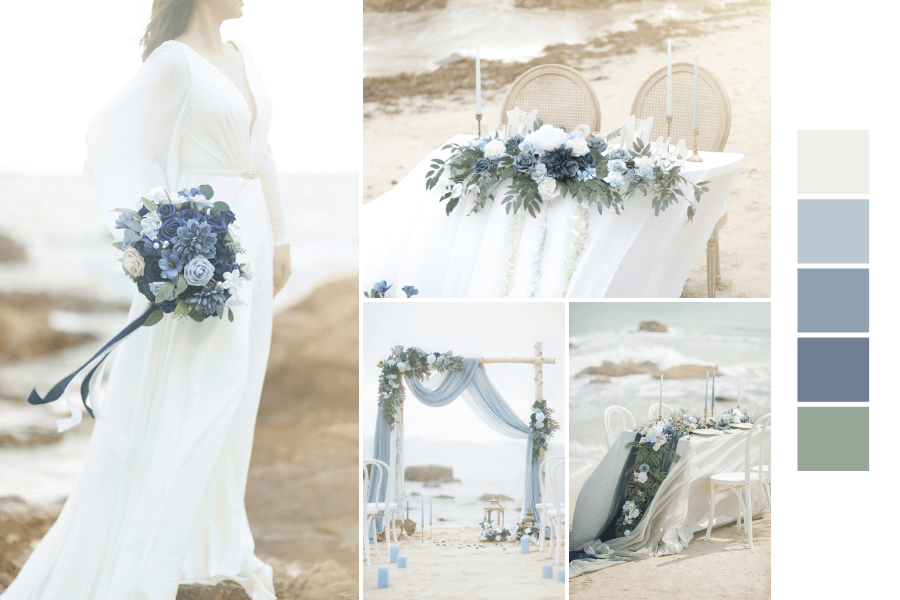 Whether you choose to incorporate blue into your wedding theme colors, wear a sapphire, or simply picture the ocean on your big day, think of it as a relaxing presence that reminds you of the trust you share with your partner. If nothing else, leaning on that trust should be all you need to have a successful start to married life. Because what eliminates more nerves than the complete trust of the person you’ve chosen to spend your life with?

How to Pick a Wedding Boutonniere
Tips & Guides